More hospital personnel in Kansas are protecting themselves and their patients from the flu each year, placing Kansas among the top in the nation. The annual Health Care Personnel (HCP) Influenza Immunization Survey, conducted by Kansas Healthcare Collaborative (KHC), found that 93.6 percent of hospital personnel in Kansas received influenza vaccination during the 2016-17 flu season. 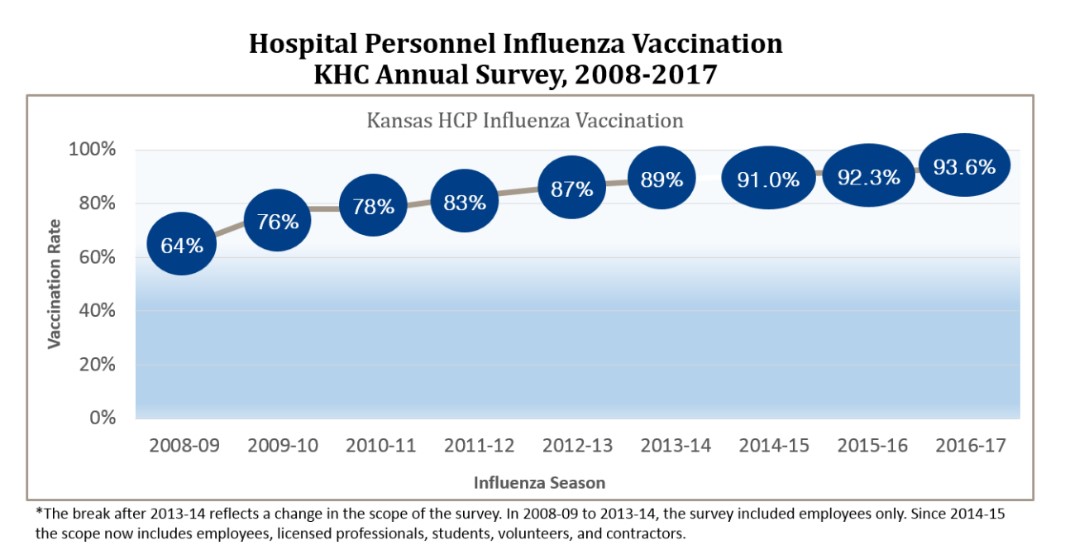 “Hospitals in Kansas are providing education on the importance of safety measures such as immunization against influenza,” said Kendra Tinsley, KHC executive director. “This is part of an on-going effort across our state to improve employee and patient safety and health care outcomes.”

KHC works with hospitals and health care professionals throughout the state, providing education and encouraging the adoption of best practices and resource sharing to improve health care quality, safety and value.

Ninety-eight percent of Kansas hospitals participated in this year’s survey, with 138 of the 141 hospitals surveyed in the state responding. KHC collected the data from the CDC’s National Healthcare Safety Network and through an online survey for the 2016-17 survey of Kansas Hospital Health Care Personnel Influenza Immunization.

Survey findings also show that hospitals are achieving higher immunization rates by providing employee education on the health risks of the flu and the benefits of immunization, by aligning policies with national recommendations, and by making vaccination opportunities convenient for employees. Most hospitals provided on-site vaccination at no cost or low cost to increase influenza immunization coverage. Among its resources, KHC maintains an online HCP Influenza Immunization Toolkit for hospitals.

→ Subscribe to the KHC newsletter to receive regular updates.