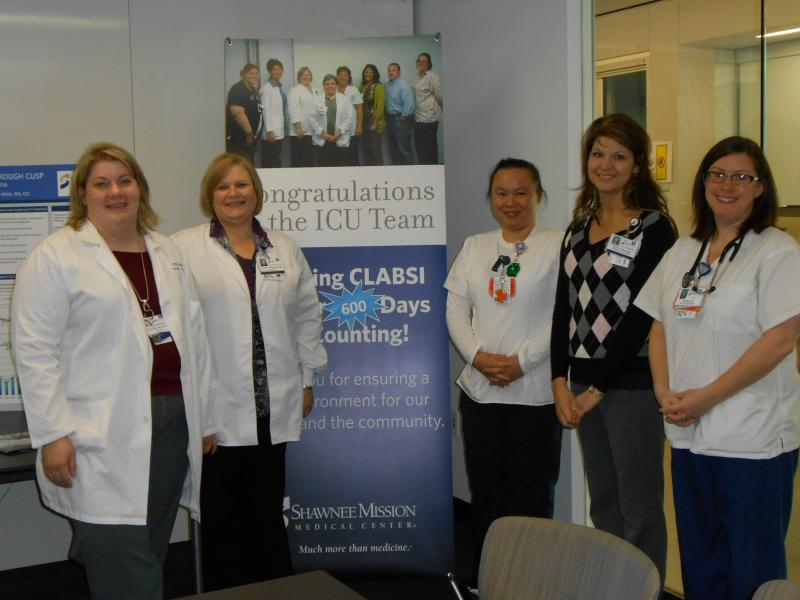 The SMMC team: (l-r) Lori Swope, Leslie Smith, Laura Badjalimbe, Stacy Steiner, and Wendi Davies.Recognizing communication as a global unit system failure led to a culture shift in the Shawnee Mission Medical Center (SMMC) ICU and resulted in 600 days (and counting) without a central line-associated bloodstream infection (CLABSI). SMMC is a 508-bed facility in Shawnee Mission that admitted 20,520 patients in 2011.

According to SMMC Infection Prevention and Control Manager Lori Swope, RN, BSN, MHA, CIC, the team applied the principles of the national patient safety program, Comprehensive Unit-based Safety Program (CUSP) to discover system failures, opportunities for improvement, and implement actions to prevent harm. The team implemented the effort in May, 2011, celebrated when they surpassed the 500-day mark in August of 2012, and participated in a facility-wide celebration on Dec. 10, just one day after they hit the 600-day mark.

CLABSI are common, costly infections that kill approximately 31,000 people annually in the United States. Attributable costs per bloodstream infection are estimated between $3,700 and $29,000.

Swope said the most successful process that SMMC implemented has been the "rounding to influence." Rounding to influence is a non-intimidating/non-punitive evaluation method that assesses and influences practice integration at the bedside. The process also increases staff sense of accountability related to safety and practice changes.

"We just call it rounds," Swope explained, "but people really did learn." She added, "the administration thinks it's phenomenal, and now is using rounding to influence hospital-wide."

Through CUSP, the clinical coaches' model -- which assigns a mentor to a team of frontline nurses -- was implemented. This model provides a communication avenue that closes the knowledge gap on central line maintenance care strategies.

House-wide in-service training on "cleaning the hub" has proved successful as well. Overall the facility has identified only five CLABSI to date in 2012, so the statistical outcome is pretty dramatic.

All departments also have established a Quality Bulletin Board to announce the last date of each hospital-acquired condition.

Swope said that based on the hospital's success with CUSP CLABSI, other SMMC units have joined the CUSP CAUTI (catheter-associated urinary tract infection). One unit joined in January, 2012 and five additional units have joined cohort 5 starting in January 2013.

KHC has decided to not offer the 2020 Summit on Quality.