Quality Improvement Goal: By January 1, 2020, the hospital aimed to improve to 100% adherence to all three-hour sepsis resuscitation treatment bundle guidelines.

Following a Joint Commission survey in December 2018, the team at Coffeyville Regional Medical Center (CRMC) realized they had taken an eye off the ball when it came to sepsis. They identified a gap in early identification of Systemic Inflammatory Response Syndrome (SIRS) criteria and organ dysfunction, as well as implementing appropriate CMS sepsis core measure interventions—specifically nurse-driven interventions.

The team’s quality and nursing leaders chose to focus on sepsis and early recognition of severe sepsis and septic shock criteria, with a nursing focus.

Leadership decided to recognize nurses who were properly adhering to the new interventions.

“Historically, we always communicated the fallouts to the nursing staff—that is, when the antibiotic did not get started within the three-hour window,” said Abby Lickteig, Quality Improvement Nurse at CRMC.

“We decided to take a different approach for this project—acknowledge and reinforce positive actions by team members,” she said. “For example, we sent ‘Thank you for being a Sepsis Superhero!’ messages to our staff, which we can say certaintly gained much more attention and response than drawing attention to the errors.”

CRMC serves a rural population in southeast Kansas. Like all hospitals, the organization wants its patients to receive high-quality, evidenced-based care. Data played an important role in helping the quality team identify “fall-outs” among the few sepsis cases that did not meet all criteria of the three-hour sepsis treatment bundle. While antibiotic selection was found to be correctly performed, a key opportunity emerged for improving nursing response time to administering the broad-spectrum IV antibiotics, as well as completing documentation.

The quality department began chart abstraction in June 2016 but did not have authority for providing follow up and education with physicians and nurses.

CRMC established the goal that by January 1, 2020, the hospital would improve to 100% adherence to all three-hour sepsis treatment bundle guidelines—specifically, adherence to administration of broad-spectrum IV antibiotics.

The group started with engagement at the medical staff level, as well as nursing leadership, said Lickteig. This was accomplished by having all parties present at Medical Staff Quality Improvement Committee meetings.

“Our staff really wanted to deep-dive into the data and understand where our fails are, why are we failing,” said Lickteig. 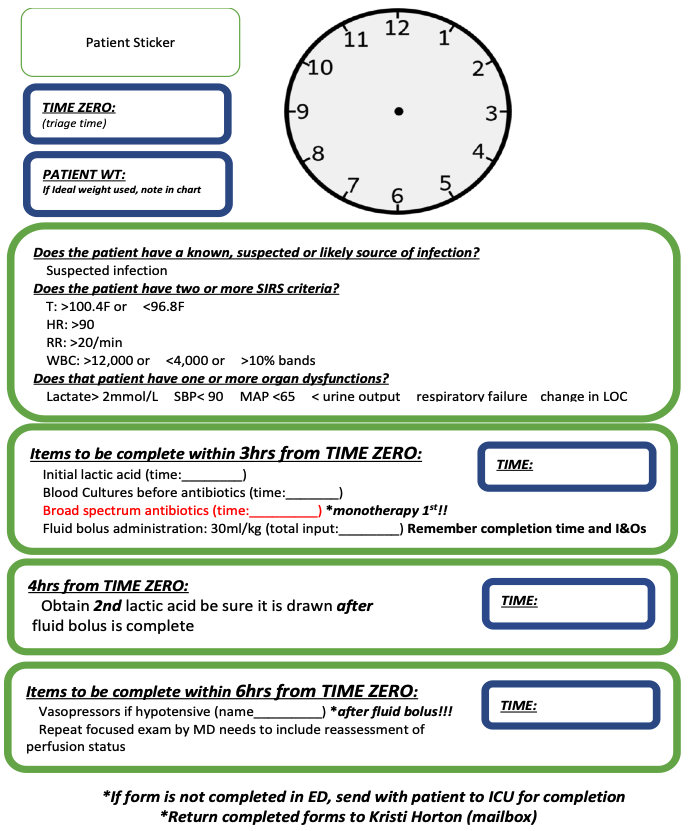 Nursing leadership and quality improvement team members utilized resources provided by the KHC Hospital Improvement Innovation Network (HIIN) to re-educate nursing staff. A specific tool that was adopted and implemented came directly from the HIIN’s Listserv.  The RN Sepsis Communication Tool was another tool that was shared via a hospital in the network, which was modified slightly and implemented in the second quarter of 2019. This tool provides a visual guide for nurses. The nurse writes in “time zero” or triage time, allowing the team to know by exactly what time items in the three-hour treatment bundle must be completed. This tool is not part of the medical record and is sent to the ER Director for concurrent view.

Data review was a key driver in this project. Through data review, the CRMC team identified that for the first quarter of 2019, three-hour treatment bundle compliance was 38% with the highest reason for non-compliance being untimely administration of the IV antibiotic. Through further chart review and data collection, the team was able to determine that the antibiotic selection was correct, and the order was entered on time—the non-compliance was occurring with administering the antibiotic at the proper time. 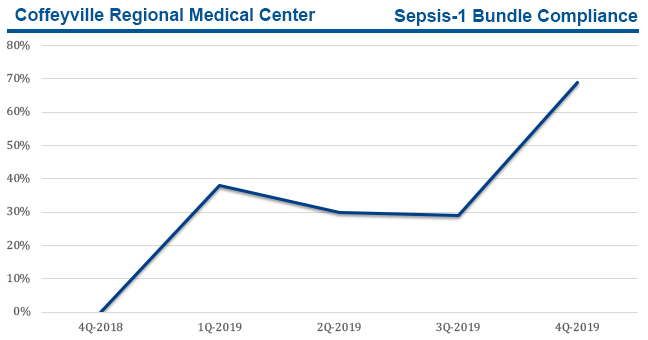 After the first year, the team has improved adherence to all three-hour treatment bundle guidelines to 70%. They are continuing to review data, educate staff, and positively reinforce proper adherence to the treatment guidelines.

The CRMC also suggests: “Don’t hesitate to re-educate. Sometimes you may feel that repeat messaging is not helpful—however, staff typically appreciates education and reminders.”

→ Print-friendly version of this story

→ Subscribe to the KHC newsletter to receive regular updates.